The more aligned the three stars are (full moon and new moon) the more alive the tides are and the wider the difference in height between high tide and low tide. This, therefore, occurs for 2-3 days a couple of times a month. However, the Earth’s orbit around the Sun is inclined with respect to Earth’s equator, which produces, for example, that in winter there are fewer hours of light than in summer. This inclination of the Earth’s orbit also makes that in the equinoxes of September and March (equinox: the same day as night lasts, 12 hours with light and 12 hours of darkness) in which the inclination of the earth’s axis with respect the sun is 0, the effect of solar attraction is greater and, as a result, even wider tides: high tides reach somewhat higher than usual and low tides discover areas that are usually covered by water most of the time.

This week we have been able to observe this phenomenon in the Basque Coast through the CAE ocean-meteorological network. For example, the Pasaia high frequency tide gauge, already operational after been in maintenance for a few days, has captured values ​​very close to 0 of the Pasaia port at low tides and close to 5 m at high tide, that is to say almost lower and higher level at which the astronomical tide can swing the sea level on our coast. 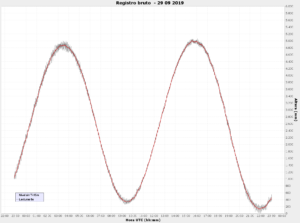