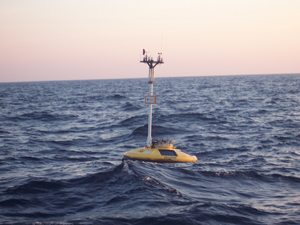 Donostia deepwater buoy began operating in 2007 and is moored 12 miles North from the coastline at 500 m water depth (continental slope).

At this depth not even 20 second-period waves (typical of blind sea storms generated by violent storms across the North-east Atlantic between Iceland and Ireland) are affected by the seabed, hence the name of deepwater buoy. As waves approach the coastline and water depth is reduced, wave shape, height and direction are determined by the water column thickness between the sea surface and the seabed. On their way to the coast, waves cross the mid- depth area (where wave shape, height and direction are slightly influenced by water depth) and the shallow water ocean zone (where wave behaviour is strongly determined by water depth) before they break at the coastline.